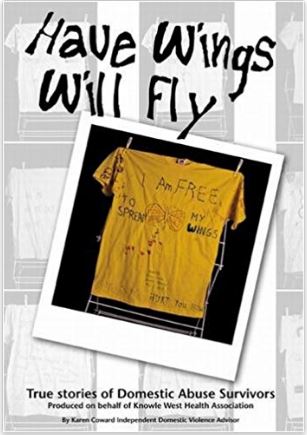 By kind permission of the Author: From the book Have Wings Will Fly

The cause of several of my ACEs

I do not recall Mr Angry entering my life but I remember being shocked when I was told that he was not my ‘real’ dad.  I remember Mr Angry as an angry man who seemed to enjoy beating my mother and hurting me. His influence on my life was negative in the extreme and it caused me to have a terrible fear of men. His actions are beyond my understanding and his drunken frustrations with his own past should never have been worked out on my mother or me.

I can recall many times of isolation, fear and loneliness when I think about this period of my life. I remember, quite vividly, one occasion when I was alone late in the evening and in the dark, no older than four or five. I was feeling terrified, alone and confused. It was a traumatic experience for a little boy to feel so utterly abandoned. I can remember I was wearing short grey coloured trousers and white underpants. I had soiled myself and I had excrement running down my legs and into my sandals. I was smelly and needed an adult to help me but I could not find one. I remember having the fear of what Mr Angry would do to me if he found out. His heavy slaps and pokes were something I often endured when no one was looking, and the fear of his anger was a terrible burden. Unless something like this has happened to you, it is difficult to convey just how traumatic an incident like this can be to a small child, and how many scars remain in adulthood. Just recalling this time in my life can stir up deep, overpowering emotions within me, causing me to be uncontrollably upset, even as I write.

I once got a severe beating from Mr Angry after one of his dogs had choked on a piece of pipe from the shed and Mr Angry held me responsible because he said I left the shed door open. He dragged me around the house, shouting, pushing, shoving, and shaking me. His spit used to hit my face when he did this and I was always terrified. This is another memory that brings a wave of emotion when I recall it. It was after an attack like this one that I developed a facial twitch and stopped communicating with people. My mother took me to a child psychologist and he sent me to a ‘special’ class in another school once a week. It was at that class that I made a papier mache mask of an angry face. I kept that mask until I was fifteen. No one ever realised that the mask was Mr Angry, the cause of my silence and my twitch.

I have too many memories of arguments and beatings. On one occasion I can remember him poking me in the chest so hard that I had small finger-sized bruises all over my chest for weeks afterwards. On another occasion, I had messed up his tools in the garage and I was dragged upstairs by him and he held my head under cold running water before throwing me on my bed and locking me in the room. I recall whimpering alone in that room, and unable to catch my breath. On another occasion Mr Angry literally hung me upside down by my feet out of the back bedroom window. I was terrified of being dropped on the concrete flags below in the garden. I remember the feeling of hot urine running over my stomach as he held on to my ankles. He was shouting and lowering me up and down, as if he was going to drop me. The pebble-dashed wall cut my knees and elbows as I screamed and apologised to him. He had caught me lowering my action-man out of the window on a piece of string. It was just a game. The fear of this incident left me with a terrible anxiety in later life that would manifest itself whenever I was up ladders, or on the edge of a sea cliff. I also had a fear of dogs that I took with me into adult life. Mr Angry used to make me stand in the kitchen if I was naughty. The dogs were kept in the kitchen and they used to growl at me. He would shout ‘guard’ and they would sit and stare at me. If I moved, they would growl. This was a horrible thing to do to a child. I was traumatised by the fear of being eaten by dogs. Later, as an adult, I lived with such a fear of dogs that I would break into a sweat and shake, even at the sight of a small dog. I always tried to hide my fear because I was so embarrassed.

The abuse I had suffered at the hands of my stepfather was extreme. I was regularly hit, shouted at, and poked in the chest until I was bruised. Watching him argue and strike my mother was also a regular occurrence and I often hid under my bed and cried late at night when I heard things being smashed and my mother screaming. The most haunting memory that I have is of him hitting me with a belt after stripping me naked and then destroying my bedroom in a rage. I was five or six when he first did this to me. I do not know what I had done to deserve such a brutal punishment and he attacked me as if I was a grown man. Firstly he ripped out all the furniture in my bedroom, literally pulling them out of their fixings. He smashed them with his feet and fists as he hurled them down the stairs. He pulled down the curtains in his rage and even pulled up the carpet until there was just a hill of mess and broken wood. He then turned on me and pushed and pulled me and ripped my clothes. He stripped me naked and then hit me with his belt. I do not know were my mother was when this happened, I just remember cowering in the corner and crying and shaking for a long time afterwards. He also once sat on my little chest and force-fed me with sprouts because I would not eat them. I remember the feeling of choking on vomit when he did this and thought I was going to die. He must have weighed at least fifteen stone. He was a fat man with a mustache and I was a skinny kid with a pale complexion.

Today, more than 60 years on, I am happily married with wonderful children. I have put the past behind me and moved on with my life.  I will always be a survivor of ACEs abuse but the abuse no longer occupies my daily life. Despite Mr Angry, I am happy and loved. He died lonely and burdened with his guilt.